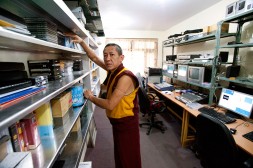 Recently Namgyal Archive, a long established audio visual archive attached to Namgyal Monastery has been integrated into the existing audio visual section of His Holiness’ Office resulting in greater human and technical resources.

His Holiness has declared that he wishes to dedicate himself primarily to three commitments, namely– Firstly, the promotion of human values such as compassion, forgiveness, tolerance, contentment and self-discipline. His Holiness refers to these human values as secular ethics; Secondly, at the level of a religious practitioner, to the promotion of religious harmony and understanding among the major religions of the world; Thirdly, to work for the welfare of the Tibetan People.

The audio-visual section primarily gathers information to promote the three commitments mentioned above. In keeping with His Holiness’ wishes, the message that is important to document is primarily that of ‘Secular Ethics.’ His Holiness encourages people to be
ethical in a non-sectarian way. He says that the practice of secular ethics need not contradict any religious or spiritual tradition or even the lack of religious belief. He is interested in employing a scientific basis to show that it is in fact good for the health to be ethical or compassionate, and if practiced, ethical behavior will prove to be beneficial for all concerned.

His Holiness spoke in June to a gathering of 8,000 people in a teaching requested by several Indian groups and highlighted “Over time we have forgotten the practice of love and compassion, which should be seen in a secular way. If you look at India, there has been for over a thousand years, respect for people of all religious and non-religious traditions. Therefore we need to promote today, this compassion through education in secular ethics. I feel that this education must start in India as a model for secular ethics. We can go ahead and practice religious traditions after the study of ethics, otherwise religion could be used for ulterior purposes.”

Another important contribution the audio-visual section makes is one that is less evident. Having upgraded into high definition filming and moving into higher quality audio and video has made their efforts world class. With this transition the office workers and Tibetan community feel proud and empowered.

The audio-visual section is therefore responsible for professional productions. They have organized the several translations of teachings and their filming. It was also His Holiness’ wish to have the content available on the official website in several different languages, and the a/v team has also been instrumental in supporting this multi-lingual expansion. Although the team covers most of His Holiness’ commitments in India, when it is not possible for the team to cover events they organize for the materials to be sent to them in an effort to maintain a homogenous continuity of events.

The functions carried out by this department include – collecting materials, archiving, dissemination, still photography, high quality video and audio recording, and providing materials for anybody that may be interested in access to this information. They also supply their material to Buddhist organization – Korean, Taiwanese, and Russian communities are currently translating many teachings given to them by this section.

All the funding for this department is covered by the Dalai Lama Trust. Equipment, travel expenses for staff, salaries, and all other expenses are provided entirely by the Dalai Lama Trust as part of their objective to preserve this unique Buddhist effort to promote peace, ethics, non-violence and happiness to all sentient beings. Currently there are roughly 12 million people seeking this information worldwide and this number is increasing steadily.

The message of His Holiness is important to many people from all over world, and therefore the archiving work of the audio-visual section will contribute to the welfare of people for many generations to come.