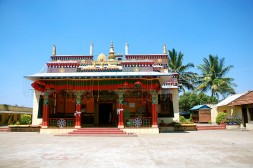 The Tashi Lhunpo Monastery in Tibet was founded in 1447 by and is the main seat of the Kunziq Panchen Rinpoche Lineage. After 1959, the monastery was re- established in South India in the Tibetan Settlement of Bylakuppe, Karnataka. 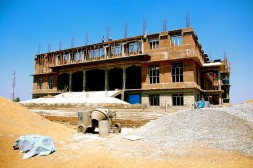 The construction of the monastery was completed in 1972. At that time, the number of monks was quite small. Since then the various activities of the monastery have expanded and flourished. Because new monks have entered, year by year, the number of monks has increased so that now the shrine room is no longer large enough to accommodate all of them, and urgently needs to be expanded. 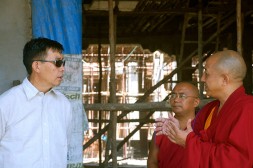 Currently, there are over three hundred monks in the monastery, with an average of 25 arriving each year. The Dalai Lama Trust has been helping fund the construction of a new building since its conception in 2010. The building will include a prayer hall, office and receptions, accommodation for guests, science classrooms, kitchen and living areas for important visiting Lamas. 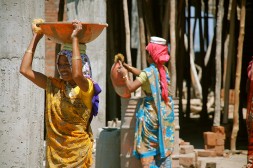 In May 1995 His Holiness the 14th Dalai Lama recognized the six-year old Gedhun Choekyi Nyima as His Holiness the 11th Panchen Lama, who was immediately kidnapped and imprisoned by the Chinese authorities, who appointed another boy in his place. Since his disappearance in 1995, there has been no word of the whereabouts of the Panchen Lama, and there is growing concern over whether the young Panchen Lama is alive or not.

In spite of the absence of their leader, the Tashi Lhunpo Monastery continues to provide a very high level of education for monks of all ages, and promotes and preserves Tibetan Buddhism under such trying times. The monks in this monastery, in addition to their studies also go to regular school and study English, Science, Mathematics, Social Studies and Tibetan.