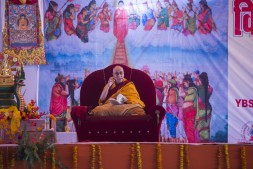 His Holiness the Dalai Lama was invited to give teaching on Dharmapada at Sankissa, historically known as Sanksya, in Farrukhabad District of the Uttar Pradesh state, for three days, from January 30th to February 1st 2015. This teaching event was organized by the Youth Buddhist Society (YBS) of India and funded by The Dalai Lama Trust, India. 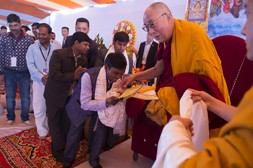 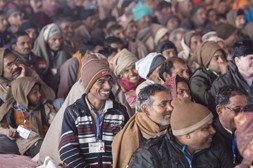 YBS India is a non-governmental, non-sectarian, non-profit, non-political people’s development movement based on Buddhist principle of bringing peace, harmony and unity to the world with 20 plus core local and foreign volunteers or members to lead and manage its regular activities and programs in India. It also has over 1,000 registered members or volunteers from all over the world as its president Suresh Chandra Bauddha, who is also the founder of the Society had described. 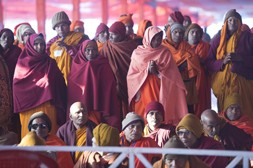 He also mentioned that since from 2005, YBS India dedicated its utmost effort and commitment to invite His Holiness the Dalai Lama to visit Sankissa. But it didn’t happen till today for His Holiness enable to visit here and give a teaching to thousand of local and global Buddhist followers. So it is a great honor and privilege for his followers including the organizers to attend this teaching at Sankissa where Buddha Shakyamuni descended from heaven after finishing his three months long teaching course to his mother. 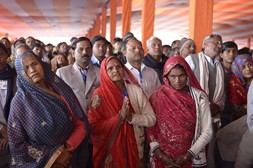 His Holiness the Dalai Lama arrived in Sankissa in the morning of January 30th from a short flight from Delhi to Farrukhabad airport. He then arrived to the Buddha’s descending site by car and walked to the foot of the Stupa by waving his greeting hand to the hundred of eagerly waiting crowd, where he was cheerfully welcomed by Mr. Alok Kumar Shakya, UP State Minister for Technical Education, Mr. Suresh Chandra Bauddha, President of Youth Buddhist Society of India, Kailash Chandra Bauddha, Hindi translator and member of YBS, DC and SP of Farrukhabad District and other members of the organizing committee. 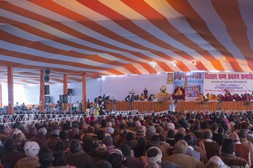 His Holiness’s Dhammapada teaching started from the morning of January 31st at YBS ground, where over 20,000 audiences had attended. They included local lay people with majority number, around 500 local Indian monks, about 1000 Tibetans many of whom had travelled from Delhi and UP to attend, and about 50 foreigners from East Asia, Europe, North America and other parts of the world. The two days teaching was directly translated in to Hindi at the venue and English translation via radio transmission was also made available to foreigners. 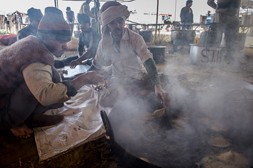 Food and shelter were also provided for free of cost to all the audiences travelled from far or near to attend the three days event. The organizers had acquired and hired adequate mattresses, tents, barricades, carpets, sound system and caterer from Delhi and UP areas to facilitate every possible requirement for the event to run it successfully. Two courses of meal-lunch and dinner were served to all the registered audiences. A meal box contains lunch was distributed to the people at the main entry gates by the volunteers and dinner was served to the 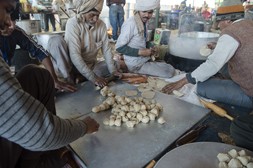 public audiences from 6pm at the YBS ground. According to the source, there were more than hundred of people involved in preparation of meal for the audiences during three days event. And mattresses and blankets were also distributed to the attendees to avoid the cold weather during teaching. 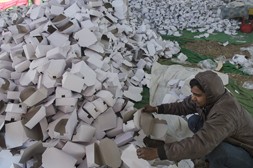 The Dhammapada teaching event concluded on February 1st with a word of thanks and reading of financial report by YBS President and its members as well as handing out certificates of appreciation to the core volunteers by His Holiness. Back at his hotel, His Holiness met with Chief Minister of Uttar Pradesh, Mr Akhilesh Yadav. They had also a lunch together at the hotel. 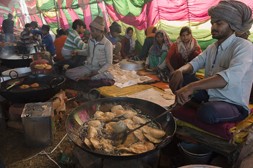 So in brief, it was the collective effort of all those people at the scene and behind the scene, who were actively involved in the ground works of arrangement and implementation to organize the three days event at Sankissa very successfully. This became very possible due to the support of many people lead by the hard works of YBS India and financial support of the Dalai Lama Trust.