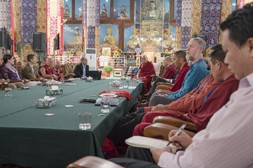 The First International Emory-Tibet Symposium: Bridging Buddhism and Science for Mutual Enrichment was organized at the congregation hall of Drepung Monastery of Mundgod, State of Karnataka, South India. Drepung Monastic University is widely known as the second Nalanda for its excellence in Buddhist studies over the centuries. It is also one of the most prestigious, largest and leading Buddhist learning centers existing in as well as outside Tibet, which has been the home for thousand of Tibetans and non-Tibetans to study Tibetan Buddhism. 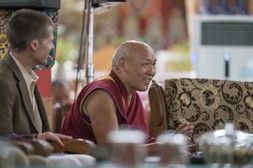 This conference was co-sponsored by the Dalai Lama Trust and Emory University in collaboration with Drepung Monastery and Library of Tibetan Works and Archives. It had brought a number of internationally renowned scientists with different academic backgrounds and emerging Buddhist scholars trained in science altogether for three days to engage in dialogue and discuss different interesting topics with His Holiness the 14th Dalai Lama. The audience consisting several thousand people from different walks of life including monks and nuns, lay people and international visitors. 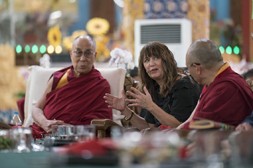 onference of bridging Buddhism and Science for mutual enrichment showcased a long range of topics, commonly shared by Buddhist scholars from East and modern scientist from West. Therefore, it was just like east met west or vice versa through dialogue process where exchanging of new ideas took place after co-examining, co-investigating and engaging with similar questions from deferent perspectives. This conference also coincided with a significant event of celebrating the 600th anniversary of Drepung Monastic University to commemorate its commitment and efforts towards the achievement of academic excellence for the past 6 centuries. 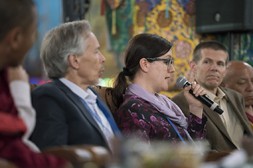 The presenters of the conference covered various aspects of Buddhism and Science including physics, neuroscience, philosophy, Biology, Secular ethics, etc. through power point presentation in English and Tibetan which made easy for thousand of observers hailed from different parts of India and abroad to understand and explore the concept of all the topics and sub-topics from 18th to 20th December 2016. 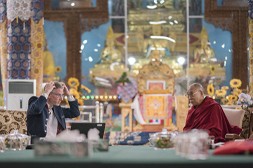 Large slideshows and HD quality TVs had been installed at all the angles in the conference hall for the observers to have full access to all the presentations displayed by each and every single scientists and rising Buddhist scholars throughout the day. A simultaneous translation in Tibetan and English via radio transmission was also made available for those who preferred it. The Audio and Video section of our office broadcasted the three days conference live to the worldwide audiences. A large screen was specifically placed at the debating courtyard of Drepung Monastery for five to six hundred of audiences who didn’t have entry pass to the main venue. 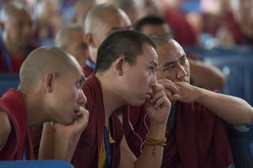 For the convenience of all the attendees, three separate dining locations were prepared for respective category of participants; presenters, special guests, and general observers do not necessarily have to line in a queue for enjoying meals. Catering agents were hired to serve three-course of meals contains different cuisines; breakfast, lunch, and dinner to all the participants throughout the days of the whole conference for free. Free accommodation along with reimbursement of travel expenses and other expenses were also provided to all the invited participants and guests from a different part of India including monks, nuns, students and Indians. After the arrival of His Holiness the Dalai Lama to the conference venue from Drepung Lachi by walk, Geshe Lobsang Tenzin Negi started the morning session with a brief welcome-cum-introductory remarks about the aims and objectives of organizing such a unique conference, as well as the evolution of the Emory-Tibet Science Initiative project in the presence of His Holiness the Dalai Lama, Lamas and Abbots of various monasteries, heads and members of Central Tibetan Administration, speakers and other guests as well as participants. This was followed by a message from His Eminence Gaden Tri Rinpoche, speech from His Holiness the Dalai Lama, a video message from Dr. Gary Hauk of Emory University respectively.

In the presence of His Holiness the Dalai Lama, the main session of the very first day commenced with a video presentation by Dr. Robert A. Paul suggesting that the 21st Century as a new Axial Age by reasoning and referring various accounts of historical facts and figures, which followed by a presentation from Dr. Michel Bitbol emphasizing on the needs of philosophical evaluation for dialogue between Science and Buddhism which he thought as a bridge between the two thoughts and then Dr. Carol Worthman who is a biological anthropologist, talked on learning from difference: dialogue of Bu ddhism and science in the Emory-Tibet Science Initiative. She specifically stressed on the enormous benefit that can offer not only to both parties but also to humanity through constructive exchange between Buddhism and western science. 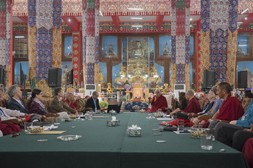 The second session started with philosophy, which mainly focused on what is science by Dr. John Durant. He criticized three misunderstandings about the nature of science by reasoning that science can’t be understood as the work of single individuals. Rather it is best seen as the product of a global culture devoted to the creation of reliable knowledge about the natural world. The second topic was on knowledge or valid cognition in Buddhism by Ven. Sonam Choephel by mentioning that it is necessary for both Buddhist scholars and western scientists to learn about each other’s fundamental concepts to build a meaningful and mutually beneficial bridge between the two parties. The session continued with a question and answer session with presenters, panelists and ge 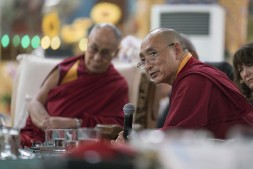 neral observers in the evening hour. This was followed by monastic science demonstrations by science students at Drepung Loseling Meditation and Science Centre. So with this, the first-day program concluded by a contemplative research panel at Drepung Loseling debate courtyard in the presence of panelists like Corina Aguilar-Raab, Gaelle Desbordes, Timothy Harrison, Joseph Loizzo.

The second day of the conference started with presentations relating to physics whereby Dr. Christopher Impey talked about the fundamental constituents of the universe and how did it originate. He mentioned that the universe and its material constituents came into being 13.8 billion years ago in a singular and dramatic event called the big bang. Ven. Thabkhe immediately presented his presentati 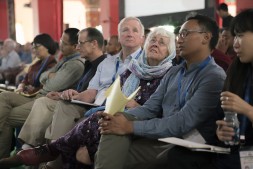 on on the causal factors for the origins of the universe from the Buddhist perspective in which he reasoned that Buddhists do not accept a creator being as the point of origin of the Universe. Instead, they postulate two principal causal factors that brought forth our Universe: a material cause and a conditional factor. The afternoon session began with a presentation by Prof. Scott Gilbert on developmental biology as a science of dependent co-origination. He said developmental biology is the science that studies how the different organs; the heart and 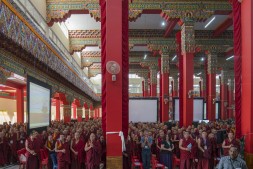 brain, for instance, are generated from one original cell, the Zygote (fertilized egg). He also said how organs come into being through dependent co-origination at the levels of fertilization. Ven. Ngawang Norbu presented Buddhist perspective on the origination of life on earth by explaining that Buddhism places much emphasis on the development of inner life or mind rather than the physical body. This presentation also talked about the Buddhist concept of life, the essential features of life, and various forms of life, etc. Sessions like Q&A with presenters and panelists, monastic science demonstration and translating science into Tibetan were also held respectively in the evening. The morning session of the third day focused on mind and its relationship to the body, brain and subjective experience from neuroscience and Buddhist perspective. This session began with a presentation by Dr. Christof Koch, emphasizing what biology and neuroscience have learned about the mind-body problem, in particular about the organ of the mind, the central nervous system or brain as well as the relationship between the architecture of the neocortex and conscious experience by using behavioral techniques from perpetual psychology. He also put formal theories explaining which types of physical systems are capable of having conscious experience and why. Contradictory to above comprehension put forth by neuroscientists and biologist on mind and body and their relationship, Ven. Lodoe Sangpo critically introduced his presentation on nature of consciousness and its relationship with the body from the perspective of Buddhist science. Unlike neuroscience’s understanding of consciousness as an emerging property of certain physical substrates, Buddhism views consciousness as an immaterial, purely subjective entity that has an innate quality to cognize its objects. 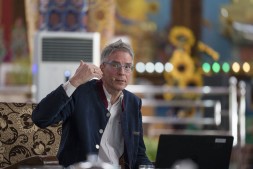 oon session was on secular ethics in education and why education needs an ethical component. This session was divided into two parts, first part focused on educating the heart through recent science on social and emotional learning and ethical education by Dr. Kimberly Schonert-Reichl in which she mentioned the growing consensus among psychologists, educators, and education al scholars regarding the need for a comprehensive vision of education. She also mentioned an approach for enhancing children’s success in school and in life through educational practices designed to promote student’s social and emotional (SEL) and ethical education. In the second part, Geshe Lobsang Tenzin Negi presented a framework for social, emotional and ethical development in K-12 and university education. This presentation conveyed Emory University’s framework for the inclusion of compassion-based ethics in k-12 and university education, which has been developing at the request of His Holiness the Dalai Lama in order to implement his far-reaching vision for educational curricula based upon secular ethics. At the end of the day, Gael Daesborde summarized all the notable points of the symposium proceedings and eventually invited His Holiness the Dalai Lama to make his final remarks by which, His Holiness thanked all the presenters and panelists as well as other parties for their participation in the Initiative. He also mentioned two goals of the conference; first is to improve our knowledge and understanding, second is the happiness of all 7 billion human beings alive today.

Session 1-The 21st Century: A new Axial Age? By Robert A. Paul. Philosophy as a Bridge Between Science and Buddhism by Michel Bitbol. Learning from difference: Dialogues of Buddhism and Science in the ETSI by Carol Worthman.

Session 2- Philosophy: How is knowledge Established, and What Constitutes Valid Reasoning?

What is Science by John Durant? Knowledge or Valid Cognition in Buddhism by Sonam Choephel. Q & A with Presenters and Panelists. Monastic Science Demonstrations. Contemplative Research Panel.

Session 4-Biology: What is Life and what are its Origins (developmentally as well as evolutionarily)?

Developmental Biology As a Science of Dependent Co-origination by Scott Gilbert. Buddhist Perspective on the Origination of Life on Earth by Ngawang Norbu. Q&A with presenters and panelists. Monastic Science Demonstrations. Translating Science into Tibetan.

Session 5-Neuroscience: What is mind, and its relationship to the body, brain and subjective experience?

Science and the Mind-Body Problem by Christof Koch. Buddhist Science of Consciousness by Lodoe Sangpo.

Session 6-Secular Ethics in Education: Why does education need an ethical component?

Educating the Hearts: Recent Science on Social and Emotional Learning and Ethical Education by Kimberly Schonert-Reichl. A Framework for Social, Emotional and Ethical Development in K-12 and University Education by Lobsang Tenzin Negi.

His Holiness the 14th Dalai Lama, the spiritual leader of Tibetan people

Dr. John Durant, The Mark R. Epstein (Class of 1963) Director of the MIT Museum, and Adjunct Professor in the STS Program at MIT

Dr. Arri Eisen, One of the founders of the Emory-Tibet Science Initiative and leader of the ETSI Life Science group

Prof. Scott Gilbert. Professor Emeritus of biology at Swarthmore College and the University of Helsinki, Finland

Dr. Christopher Impey, University Distinguished Professor of Astronomy and Associate Dean of the College of Science at the University of Arizona

Geshe Lhakdor, Director of the Library of Tibetan Works and Archives

Geshe Lobsang Tenzin Negi Ph.D., Professor of Practice in Emory University’s Department of Religion and founder and spiritual director of Drepung Loseling Monastery in Atlanta, Co-founder, and director of the Emory-Tibet Partnership

Dr. Kimberly Schonert-Reichl, Applied Developmental Psychologist and Professor in the Human Development, Learning, and Culture area in the Department of Educational and Counseling Psychology, and Special Education at the University of British Columbia