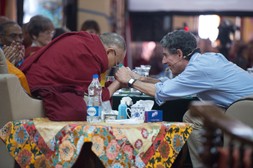 The Dialogue was co-organized by The Dalai Lama Trust (DLT), The Mind and Life Institute (MLI) and the Library of Tibetan Works and Archives (LTWA). It was attended by an audience of 1,000 inside the main hall with His Holiness the Dalai Lama and the other experts. Few hundred people watched the lively discussions live on screens set up in the nearby debate courtyard of Sera Jey Monastery.

The main theme of this second Mind and Life Dialogue held within a major Tibetan Buddhist monastic premises was: Perception, Concepts and Self from Contemporary Scientific and Buddhist 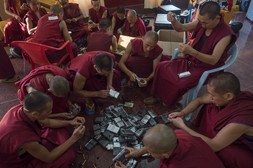 Perspectives. As usual the Dialogue was conducted between His Holiness the Dalai Lama and some of the well-known faces from both science and Buddhist worlds to present their own critical knowledge and perspectives. Each day the presentations of the scientists and philosophers were divided into several sessions. The morning and early afternoon sessions were highlighted by featured presentations and dialogues between His Holiness and presenters on the respective theme of the meeting. Late afternoon sessions were held for Q & A and general discussions between the monastic audience and the presenters. Evenings were reserved for special presentations and scientific findings which were attended by many enthusiastic monastics and others. 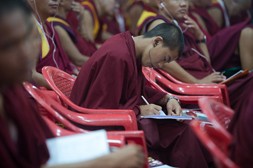 The initial session of the first day commenced with Roshi Joan Halifax expressing her deep appreciation for the invitation to the Mind and Life Dialogue XXX. It was followed by a short note from Susan Bauer-Wu, the new President of Mind and Life Institute based in USA. Before she finished her opening talk she formally invited His Holiness to open the conference which His Holiness graciously accepted by relating his own childhood inquisitiveness and keen interest to explore western science and the process of introducing science education to the Tibetan monastic institutions in India. He also mentioned the significant importance of 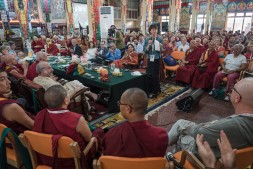 A series of fascinating and interesting understandings and new discoveries on perception, concepts and self were by Richard J. Davidson, Catherine Kerr, Mathieu Ricard, Pawan Sinha, Lera Boroditsky, Geshe Yeshe Thapkhey, Thupten Jinpa Jay Garfield, John Dunne, and others from the point of view of western science and philosophy as well buddhist science and epistemology. The respected experts made extremely engaging and inspiring presentations and points of interest for further development. 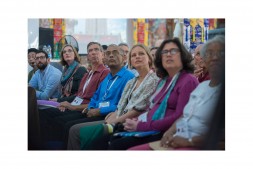 The four-day long program of 30th Mind & Life conference was made available to throughout the world via live streaming by the Audio and Visual Section of Office of His Holiness the Dalai Lama. A number of big LED screens and LED HD TV sets in different sizes were also set up from different angles at the main venue, Sera Lachi Assembly Hall to display the power point presentations in Tibetan and English languages. A team of able interpreters from the LTWA and Emory University’s Emory-Tibet Science Initiative did excellent mmminterpretation into English, Tibetan, and Chinese via radio transmission for everyone to have direct access to the presentations. Another two big screens were installed at the debating ground of Sera Jey Monastery for those who could not make it to the main venue.

From day one to four breakfast and lunch were served at several locations in and outside of Sera Lachi to all the people including monks, nuns, foreigners, locals and students who attended the Dialogue. We asked some of the attendees about the catering services and preparation works done at the venue and they replied unanimously that everything was indeed great! The Dalai Lama Trust also reimbursed the TA and DA to the monks and nuns who travelled from different parts of India to attend the conference. 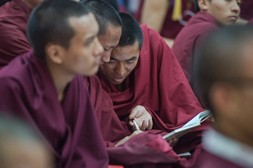 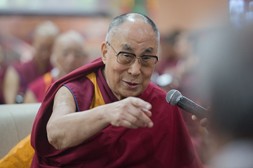 On the final day of the Dialogue each presenter shared their personal experiences and knowledge gained from the dialogues in the presence of His Holiness and monastic audience. They mentioned that they felt privileged, honoured and inspired by the enthusiastic and active participation of His Holiness as well as other participants. They were also very happy to get such an opportunity to discuss and debate with other distinguished scholars on the conference theme of perception, concepts and self from the different perspectives.

Susan Bauer-Wu expressed her acknowledgement and appreciation to His Holiness for his inspirational participation; to the Abbots of Sera Jey and Mey Monasteries for the warm welcome and hospitality; to the Library of Tibetan Works & Archives for the logistic support; to the Office of His Holiness the Dalai Lama for their generosity. She also thanked the Dalai Lama Trust, India for co-hosting and for the financial support as well as acknowledging the contributions of Hershey Family Foundation to 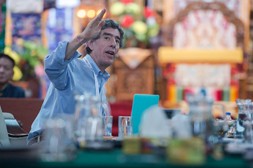 The four-day program concluded with the final remarks from His Holiness the Dalai Lama in which he said, “There are many problems, many of them man-made, so it is our responsibility to solve them.” He went on, “You don’t need to extend your gratitude towards me, instead go to your respective places and grab the opportunities that come to your way and serve others by using those tools that you are equipped with. Each of us participated in this Dialogue, the collective purpose of which is looking for a new way of thinking to solve and overcome the man-made sufferings.”

Day 1 -Perception, Concepts and the Self: Perspectives from Western Science and Philosophy, Does our Perception Mirror Reality? Theories of perception in Buddhist Epistemology, Project Prakash: Merging Science and Service and Investigating the Brain and Mind

Day 2- Examining the Perception of Body Sensations; Correlating Aspects of Perceptual Processes with Mind, Self, and Basic Physiology, Four Aspects of Concepts Formation in the Buddhist Epistemological Tradition, Language and Mind: How the Languages We Speak Shape the Ways We Think and Monastic Science Education programs.

Day 3-The Self: What Isn’t It? The Self in a Buddhist Perspective, The self in Engagement: Perspectives from Developmental Psychology and A Dialogue on Self and Self-Concepts

Day 4-Self & Ethics: The Science of Altruism, The Exchange of Ideas Between Buddhism and Western Culture: Challenges and Opportunities and Closing Dialogue: Integration and Future Directions.

Pawan Sinha, PhD, Professor of Computational and Visual Neuroscience in Department of Brain and Cognitive Science at MIT