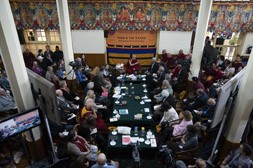 Since 1987 a series of dialogues between His Holiness the Dalai Lama and world’s leading scientists, philosophers and experts of different fields of knowledge have been organized at various locations around the world on a regular basis to critically investigate the themes of mutual interest concerning the nature of reality, consciousness, and the implications of recent developments in neuroscience, etc.  These dialogues have brought two great investigative traditions-modern science and Buddhist teaching-together to explore and share each other’s perspectives and views on different aspects of reality.

The 33rd Mind and Life Dialogue was held at the Main Tibetan Temple, adjacent to His Holiness the Dalai Lama’s 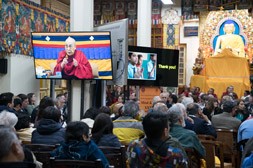 residential compound in Dharamsala, Himachal Pradesh from 12 to 16 February 2018, It was organized and funded by the Dalai Lama Trust in collaboration with the Mind & Life Institute.

This year’s Mind & Life Dialogue predominantly focused on the theme of “Reimagining Human Flourishing” by highlighting His Holiness the Dalai Lama’s profound commitment towards the introduction of secular ethics in the contemporary education system. 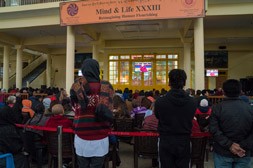 More than 300 participants from across the world including intellectuals, sponsors, guests, scholarly monks, and nuns were invited by the Mind & Life Institute and the Dalai Lama Trust to join the five-day Mind and Life Dialogue at the Main Tibetan Temple, to observe the interesting dialogues between His Holiness the Dalai Lama and western scientists, educators and philosophers on topics such as Early Childhood Development and Social-Emotional Learning, Meta-Awareness and Attention in Education Research, Ethics and Compassion in Education Research, etc.

The Dalai Lama Trust funded all the expenses incurred on hosting, lodging, transportation, catering associated with 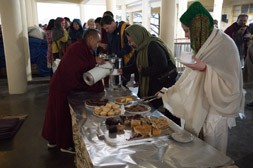 the five-day dialogue including making badges, printing brochures, and making handbags for the participants and observers.  The five-day dialogue was broadcast live via social network sites like Facebook and the official website of His Holiness the Dalai Lama to worldwide audiences by the Audio & Visual Team of the Office of His Holiness the Dalai Lama.

The Dalai Lama Trust also hosted a Tibetan cultural performance by the artists of the Tibetan Institute for Performing Arts followed by a simple dinner to all the guests of 33th Mind & Life Dialogue which had received great appreciation. 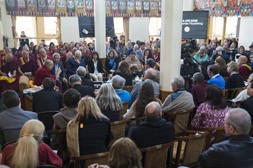 The presentations and dialogues for each day were divided into several sessions. The morning sessions were highlighted by featured presentations and dialogues between His Holiness the Dalai Lama and presenters on their respective subjects and the early afternoon session focused on a discussion amongst the main presenters which was then followed by a question & answer session with the general participants including monks and nuns. 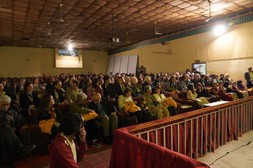 different academic backgrounds highlighting topics that were very much associated with human flourishing, and it turned out to be fascinating and enlightening to all the attendees.

The purpose of the dialogue is, as His Holiness the Dalai Lama mentioned at the meeting, “to expand the scope of our knowledge and to promote warm-heartedness, and a greater sense of oneness of all human beings to tackle the crisis of emotions we witness today”. 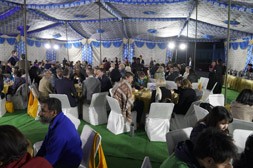 The 33rd Mind & Life Dialogue concluded with words of thanks from Susan Bauer-Wu, President of the Mind & Life Institute, by acknowledging the full support and assistance of the Dalai Lama Trust, India, and hospitality of Namgyal Monastery throughout the dialogue. She also thanked the Mind & Life board, guests, faculty members and staff, and the generous donors and supporters who made this entire event possible. Finally, she expressed her gratitude to His Holiness the Dalai Lama for his generous time. In response, His Holiness said that he considers it his duty and is motivated by a Shantideva’s verse which reads:

“Having mounted the horse of the awakening mind

That dispels all discouragement and weariness

Who, when they know of this mind that proceeds from joy to joy,

Would ever lapse into despondency?”

Social and Emotional Learning and Education in Classroom

Ethics and Compassion in Education Research

Evaluation and Implementation: Challenges and Opportunities for Human Flourishing

Sona Dimidjian, Ph. D., Associate Professor in the Department of Psychology and Neuroscience at University of Colorado Boulder

Amishi Jha, Ph. D., Neuroscientist and Associate Professor in the Department of Psychology at the University of Miami

Sophie Langri, M.A., Project Manager for the Institute of Tibetan Classics and SEL consultant with the Ministry of Education Quebec for the Grandes Rencontres Project

Sonia Lupien, Founder and Director of the Centre for Studies on Human Stress